Its September 2020 and I’ve very recently installed Linux Mint 20, Cinnamon Edition and I’m stoked enough with it to want to share the experience (with the hope to inspire someone else to make the switch).

I keep coming back to this distro as, for me, it has the simplest, fuss-free configuration to productivity that matches my workflow. Headlines, for me: 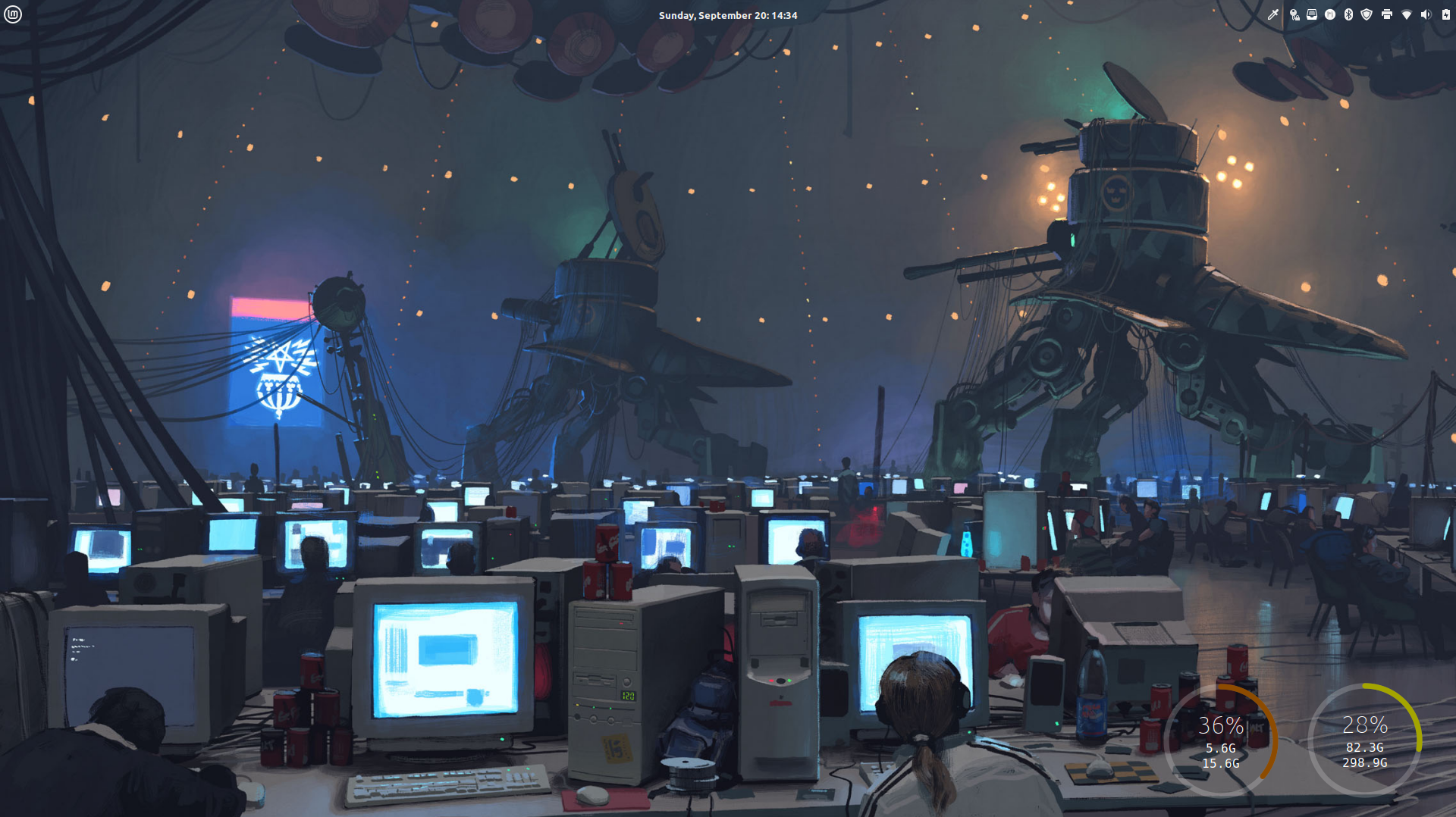 This is the first, and most simple thing. I like a single panel at the top of the desktop with minimal content:

That just leaves choosing a desktop background. I recently discovered Simon Stalenhag whose awesome work makes for a great atmospheric desktop I think.

In the past, I’ve spent a fair amount of time tweaking the themes and getting just the right icon set. Today, I have a pretty straight forward setup with minimal external installs:

I really like the transparent panel that the default theme for Elementary OS use and it didn’t take long to reproduce in Cinnamon. I found a few transparent panel themes through the theme installer but none of them quite matched the general theme of the desktop for me. So, a tiny little DIY was required to get the desired result:

There are lots of really nice “Docks” for the Linux desktop and I do enjoy their appearance. However, I find that I just don’t use them and they do nothing but get in the way. So - no dock.

For me, the launcher has to be Kupfer:

Hitting ctrl-space at any time brings up the launcher. Start typing and find the thing you want. This includes all your applications, SSH connections from ~/.ssh/config, remote desktop configurations in Remmina and a host of other useful things.

Cinnamon has a simple multi-desktop scheme. Four horizontal desktops. I do nothing to tweak this other than give a label to each one. I do love this feature and use it all the time though. I also have the alt-tab switcher only cycle through apps in the current desktop.

After setting up my keyboard with custom second layer for VIM like navigation (see Who needs capslock anyway?), the next task is to setup core desktop navigation keyboard shortcuts. The things that I care about:

The Cinnamon team have done a great job with the keyboard shortcut setup and all the above is super easy out-of-the box.

Beyond the basics (and among other non-consequential things), I install:

There’s loads more that could be written to go into detail about why I love using Linux, and the Cinnamon desktop specifically. A lot has to do with how things just work and also get out of your way to make you really productive.

In 2020, I don’t have a single problem that prevents me from doing what I have to do. In addition, there’s plenty that makes things easier than other environments. I find having a desktop environment singing how you like it, be it OSX, Windows or some Linux DE, really helps my state of mind when working and I’ve never been happier with my setup.

If you’re curious about trying Linux, my recommendation is Linux Mint Cinnamon.